Living with a Labradoodle barking at night can be incredibly stressful. In this article we are going to look at the potential reasons your dog is barking in the night. We’ll give you tips for helping them to stay quiet, and give you and your neighbors a better night’s sleep!

Do Labradoodles Bark A Lot?

Labradoodles are fairly average when it comes to barking. They aren’t always prolific barkers, but they will vocalise when they are excited or worried. Like any breed of dog, they are also more likely to bark if barking has been rewarded in the past.

Rewarding barking isn’t as obvious as it might sound. You can accidentally reward a dog for barking by paying them attention when they whine. They can even reward themselves for barking by enjoying the sound of their own voice a little too much!

Why Do Labradoodles Bark At Night?

To stop your Labradoodle barking at night you need to find out why they are awake and alert. There are several possible reasons why a dog might bark at night. These include:

Very new puppies that have just arrived at your home are likely to be afraid during the night. As are dogs with separation anxiety.

A dog that is used to spending most of its time with their owner, or that has previously shared with other dogs and now does not, may well be lonely in the night.

Little puppies and old dogs might well need to pee during the night. There can also be an issue with dogs that are fed too late in the evening needing to poop at night too!

Disturbances In The Home

Does someone in the home get up in the night to pee, or check in on small unsettled children? Or does the central heating automatically switch on during the early hours? Noises in the home can cause a dog to bark in the night.

Likewise outdoor noises such as unexpected vehicles or wild animals can set a Labradoodle off during the nighttime hours. 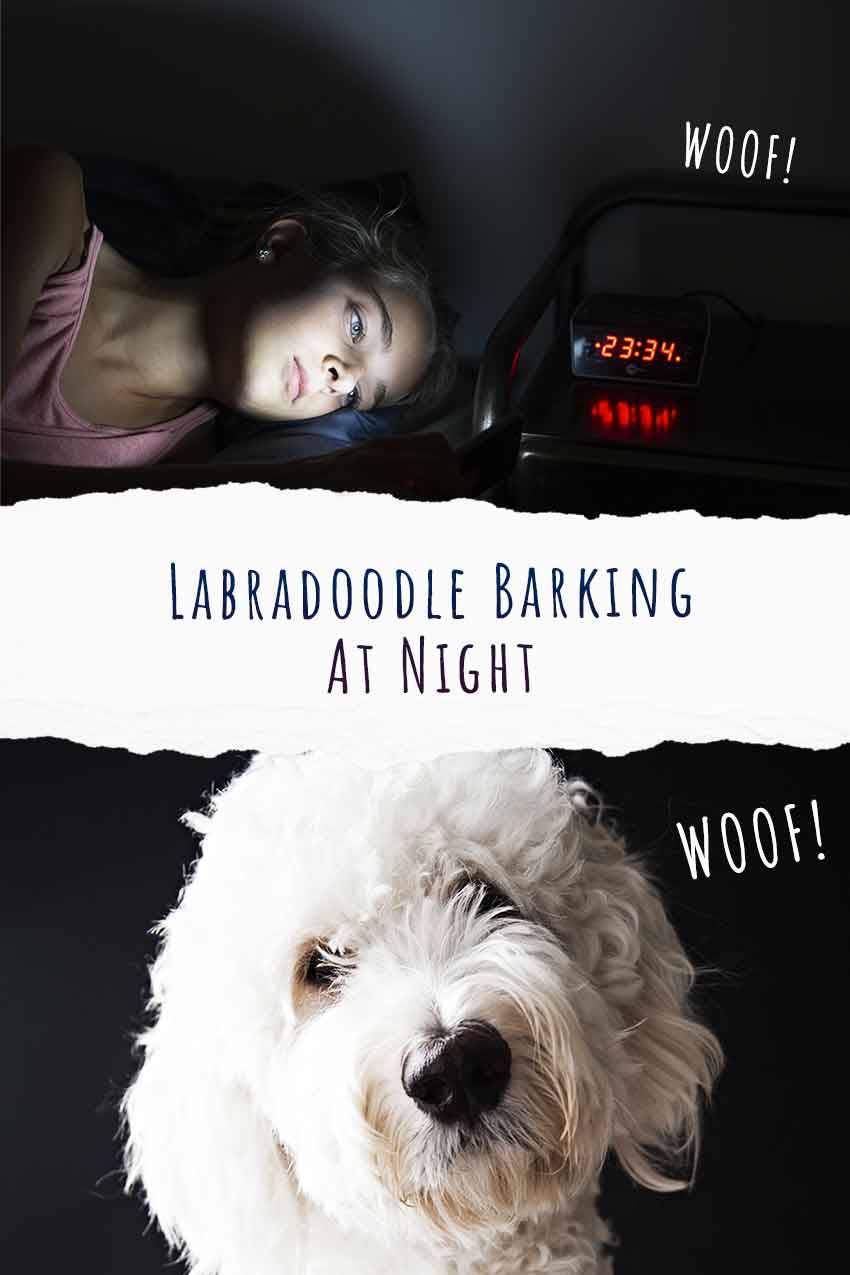 How To Stop Your Dog Barking At Night

To stop your Labradoodle barking, you first need to work out which of the possible reasons are causing them to wake up and make a noise. But first, let’s take a look at the most common way to try to resolve barking issues – ignoring the noise!

Will My Labradoodle Stop Barking If I Ignore Him?

There are a few occasions where ignoring a dog’s noise will solve the problem. If they have started barking a little at night and you don’t go down, do nothing at all and wait them out, you might get lucky.

But there are potential downsides. Some dogs will wind themselves up more and more until they are hysterical and even throw up or soil themselves. Others learn to love the sound of their own voice, and bark even more after being ignored!

The way to stop dogs barking with fear throughout the night is to help them settle in gradually and carefully. Teaching a dog to be alone is a really important part of their development. Brand new puppies often benefit from staying in your room for the first couple of nights in their crate or a large box. They know you are nearby and so don’t feel abandoned and

During the day whenever you leave the room drop a handful of kibble behind you at the doorway. Making your departure a rewarding experience! Build up time in the crate step by step, minute by minute, and only when they are happy in the crate start leaving them alone in there for a little longer.

Most new puppies are confident in their new homes after the first week, provided you haven’t left them alone for long periods of time or done anything to upset them. After this time their barking is likely to be for a reason other than fear.

How To Help Dogs That Are Lonely At Night

Lonely dogs can be helped in the exact same way that new puppies’ fear can be combated. Helping them to learn to be alone happily is a process that takes time, but it can be done with a dog of any age.

Dogs with true separation anxiety can find nighttime a real struggle, and you have two main options. One is to allow them to sleep in your bedroom with you. Some owners are quite happy to have a dog in the bedroom, some aren’t, and that’s okay. If it’s not for you then an at home visit from a positive reinforcement specializing behaviorist who will work with you to build back their confidence.

Barking For The Bathroom At Night

Puppies with small bladders will need to pee in the night, and it’s unavoidable. There are two ways to deal with this most successfully. One is to set your alarm for a very early hour of the morning, 2am or 3am usually work well. Get up, let the puppy straight out, and then put them back to bed and retire yourself.

The other is to set their crate up in a puppy playpen lined with puppy pads. They can then relieve themselves in the night without disturbing you. Most puppies have bladders able to cope without peeing in the night from around ten weeks old.

Older dogs that need to pee in the night might be having a big drink too late. It’s worth trying taking up their water two hours before you go to bed, and letting them out for a last pee just before your bedtime.

If this does not work then it’s worth having a chat with your veterinarian, who might be able to prescribe something to help. You can also look into setting up practical ways to help your elderly dog to use the bathroom at night, including creating a pee spot with puppy pads or installing a dog door to the secure backyard.

Barking At Disturbances In The Home

There are two general categories of noise in the home at night. The first is the noise the rest of the human family makes, the second are automatic noises.

If you are aware of your dog barking at night when they hear you get up, then trying to be quieter when you do so can help. As can doing your best to avoid getting up at all. But this isn’t always possible. If you have small children that are still waking in the night, then dealing with their night waking can cure the issue with your dog. Though as a parent, I appreciate this is easier said than done sometimes!

A dog that wakes up at the same time each night is likely to be being disturbed by a system or appliance in the house. Check the settings on your lights, air conditioning and heating. If your dog’s waking tallies with their timings, then change them to a more civilised time of day when you won’t mind them getting up.

Helping Your Dog Deal With Outside Noise

Some dogs are disturbed by noises outside during the night. To help restore the peace here, find out what is causing it. Setting up a little wildlife camera will show you if you are getting unexpected furry visitors in the night.

Wildlife setting off security lights can disturb dogs, so switch off your security lights for a night or two and see if this helps. Alternatively, moving your dog to a different room or adding more insulation to their sleeping quarters can cut down on disturbances too.

How To Stop Your Labradoodle Barking At Night

To stop your Labradoodle barking at night you need to work out what is causing them to wake up and make a noise. Once you have established the cause, you can work together to remove the trigger or to teach them to ignore it and settle back down to sleep.