There are three most common types of Labradoodle.

The Labradoodle is a Labrador Retriever and Standard Poodle mix.

They are the best known among the different types of Labradoodle.

But the lesser known types of Labradoodle are gaining in popularity too.

The miniature Labradoodle has a Miniature Poodle parent.

And the Australian Labradoodle has included other breeds into the mix!

Let’s find out what things they have in common, and what sets them apart.

What is a Labradoodle?

Labradoodles were one of the very first designer dogs.

They were created in the late ‘80s by Australian dog breeder Wally Conron.

Conron was tasked with breeding a low-shedding service dog.

Ideal for people who suffer from allergies.

The highly successful result was the Labradoodle!

First-generation hybrid puppies like Conron’s are also referred to as being “F1 Labradoodles”. 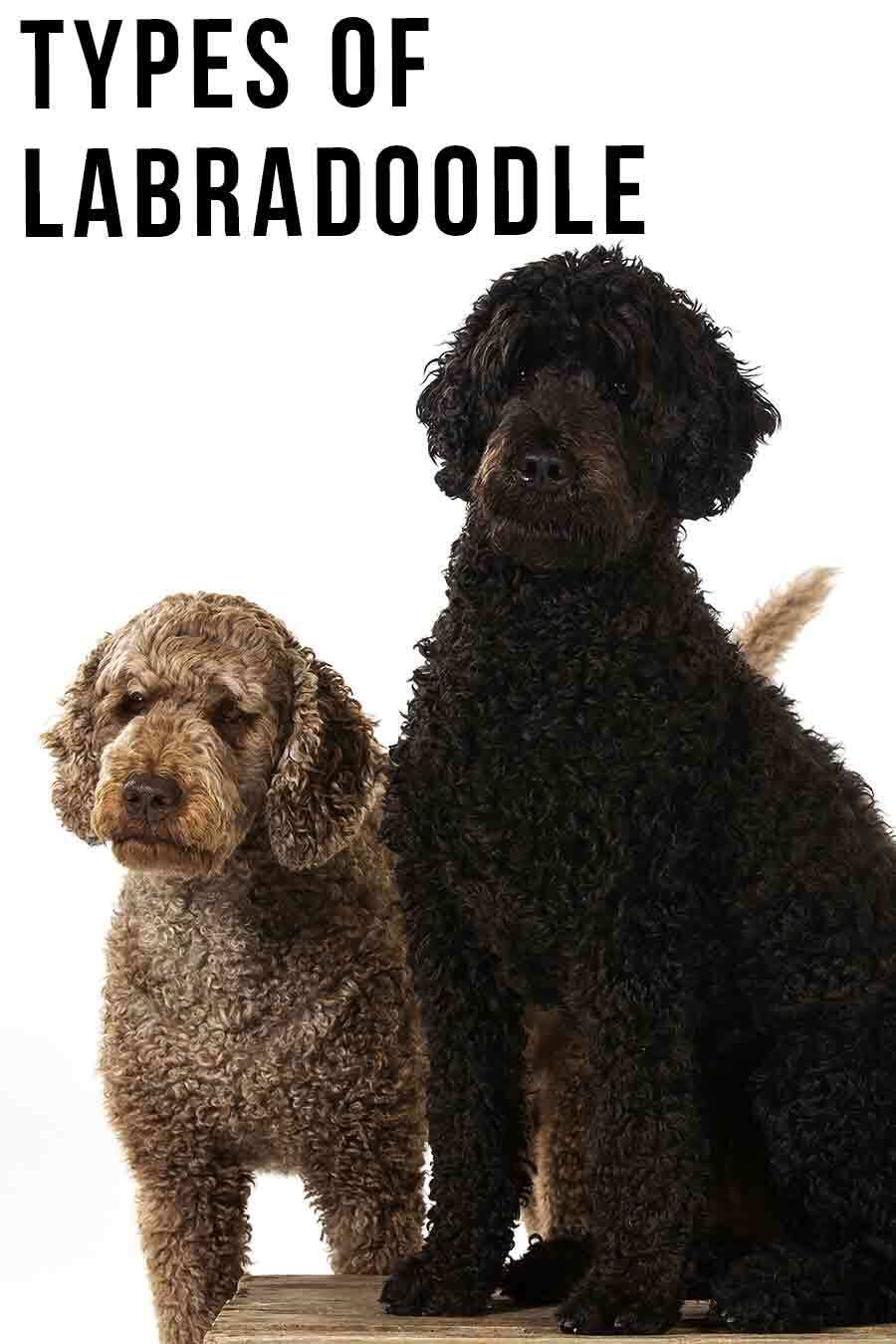 It’s a way of saying that they are one generation removed from their nearest purebred ancestor.

Mating an F1 male with an F1 female creates an F2 generation, and so on.

The problem is that appearance and temperament can be quite unpredictable in F1 and F2 dogs.

Desirable qualities from either parent aren’t guaranteed to be passed on to their puppies.

Including things like a Poodle’s non-shedding coat, or a Labrador’s easy-going friendliness.

What is a Miniature Labradoodle?

A mini Labradoodle is a first generation cross between a Labrador and a Miniature Poodle.

Breeders worried that it would be dangerous for a female Miniature Poodle.

To carry puppies that are half Lab, and too big.

So the Labrador is always the mom of a mini Labradoodle litter.

Just like a standard Labradoodle, mini Labradoodles inherit a random combination of traits from each parent breed.

What is an Australian Labradoodle?

The Australian Labradoodle project aims to solve the problem of unpredictable qualities in Labradoodles.

Those kennels started trying to create new generations of Labradoodles that breed true.

Aussie Labradoodle breeders have also used other breeds to improve the coat, size, temperament and gene pool of their dogs.

At the moment, the Aussie Labradoodle is also officially a mixed breed.

But in 1997 the Australian Labradoodle breed standard finalized.

And the hope is that eventually the pedigree will be closed to further contributions from other breeds.

From that point on, Australian Labradoodles will be eligible for recognition as a new purebred dog.

However, it will be at registries’ discretion whether they recognize them or not.

The size of first generation Labradoodles depends largely on the size of the Poodle parent.

Standard Labradoodles are about 21 to 26 inches tall and weigh around 55 to 90 pounds.

Standard Australian Labradoodles are about 21 to 24 inches tall and weigh around 50 to 70 pounds.

Medium Australian Labradoodles are 17 to 20 inches and weigh around 30 to 45 pounds.

Miniature Australian Labradoodles are only 14 to 16 inches tall and will weigh about 15 to 30 pounds.

There are 3 different types of coat that first generation Labradoodles can have.

One is the long, curly coat of a Poodle.

Another is the straight coarse coat of a Labrador.

And there’s also a fleece coat – which is a combination of the two coats.

It can be difficult to tell what type of coat a Labradoodle puppy will grow up to have.

Because it can change before they’re fully grown.

Regardless of their coat type, Labradoodles come in a wide array of colors including:

As we’ve said, Aussie Labradoodles are being bred for predictability.

So, it’s more likely that breeders will successfully capture the genes for a non-shedding coat in each litter.

Their coat can be straight, wavy, or have spiral-shaped curls.

They may also have a curly, wool-textured coat.

Some Aussie Labradoodles also have the soft, fleece-textured coat of the Cocker Spaniel.

The Australian Labradoodle coat also has a higher chance of being two or more colors.

Is Either Type of Labradoodle Hypoallergenic?

Despite the fact that Labradoodles are often touted as being hypoallergenic, this is misleading.

The truth is that all dogs produce allergens in their saliva, sweat, and urine.

However, if they inherit the curly coat of the Poodle they will shed much less than most other breeds.

And this may make them easier for people with allergies to tolerate.

This is why Labradoodles were developed in the first place, and a big part of their appeal for many people.

We can also look at the different types of Labradoodle in terms of their personality.

As a mixed breed, the original Labradoodle can take on traits of either parent breed.

Labradors are known for being gentle, friendly, and active.

Poodles, for their keen intelligence, loyalty, and high energy levels.

However, both parent breeds have an eagerness to please that generally makes them easy to train.

This is why Labradoodles often excel as service or therapy dogs.

Not all Lab and Poodle traits are so harmonious though.

Labs are famously friendly and even overly boisterous sometimes.

While Poodles can be reserved to the point of standoffish.

It’s impossible to predict in advance how a litter of mixed breed puppies will turn out.

Labradoodles may vary according to which parent they take after.

But the Aussie Labradoodle’s temperament is more reliable.

This is because their breeders have spent a long time pursuing consistency over many generations.

They’re known to be friendly, gentle, loyal, and excellent dogs for families with children and other pets.

There is evidence that mixed breed dogs are less at risk of genetic diseases than purebred dogs.

This is called “hybrid vigor”, and it’s good news for all types of Labradoodle.

However, puppies are still at risk of hereditary diseases found in either parent.

And especially ones present in both Poodles and Labs, including:

Types of Labradoodle – Which One is Right for Me?

A Labradoodle is a cross between a Labrador Retriever and a Standard Poodle.

A miniature Labradoodle has a Miniature Poodle father, so it turns out smaller.

An Australian Labradoodle is developed from several breeds.

Aussie Labradoodles tend to have more consistent traits, compared to the original Labradoodle.

This means an entire litter will look and act like an Australian Labradoodle.

Rather than having a different mix of traits from each parent in each puppy.

Whichever type you choose, buy a puppy from a reputable breeder.

One who can provide detailed information about their dogs’ history and health.