Labradoodles can be one of the easiest dogs to train, provided you use the right methods! In this article we are going to show you how to get the most out of training your Labradoodle. We’ll look at what motivates them, and the pros and cons of Labradoodle personalities when it comes to training.

Are Labradoodles Easy To Train?

The easiest dogs to train come from working backgrounds. Hunting dogs like Labradors and Poodles need to be able to follow a string of commands, often given by whistle, over a long distance.

They need to be able to stay focussed on their handler, and have a natural inclination to make their human happy. All these factors mean that the Labradoodle, bred from these two clever working parents, is likely to be one of the easier breeds to train too.

Working Labs and Standard Poodles that didn’t have these trainable traits weren’t chosen as breeding parents for future working puppies. Which made them more and more easy to train as time went on.

What Makes a Dog Easy to Train?

Some dogs are easier to train than others. But the things that make them easy to train might not be exactly what you think. The easiest dogs to train are those that have a natural inclination to work with humans, and that are easily rewarded.

Factors which make a dog easy to train in general include:

Clever dogs are easy to train because they can more quickly draw connections between the things they do and the rewards they get.

Focussed dogs are paying attention to their human, and therefore also benefit from more quickly working out what is getting them those tasty or fun treats.

A general interest in pleasing their owner again makes them increasingly likely to work out what you want, and to do it for you.

All dogs are motivated by food to an extent, or they wouldn’t survive. But some are more motivated than others. Some dogs are also relatively easy to motivate with other things as well, like a game of fetch or tug. Having easily accessible ways to reward your dog makes them an easier training partner.

Labradoodles have a lot of personality traits that make them an easier breed to train than many others. They are:

Intelligent dogs, Labradoodles have an ability to quickly draw connections between the rewards you are giving them and the actions they have carried out.

They respond really well to positive training through a combination of understanding the links between their behavior and your response. And by finding the food rewards incredibly motivating. They love to have a treat, even if that treat is just a bit of their kibble!

Many Labradoodles take after their Standard Poodle parent and are relatively calm around other dogs and good at keeping their focus on you.

There are a few potential issues you can come across when training a Labradoodle, and these are:

Some Labradoodles are more like their Lab parent, and find other dogs or people very distracting. Many of them have a relatively high prey drive, meaning that they are tempted by chasing wildlife.

They can have a stubborn streak too, but as long as you are using positive reinforcement training and not punishment based training this isn’t actually a very big deal. Working to gain a reward doesn’t put your dog into conflict with you, so being stubborn doesn’t enter into it.

It’s only when you are stopping your dog from doing something, rather than encouraging them to do something good, that being stubborn is a potential issue for training. Keep up with those modern methods, proof your cues to various distractions, and none of these cons are the biggest deal. 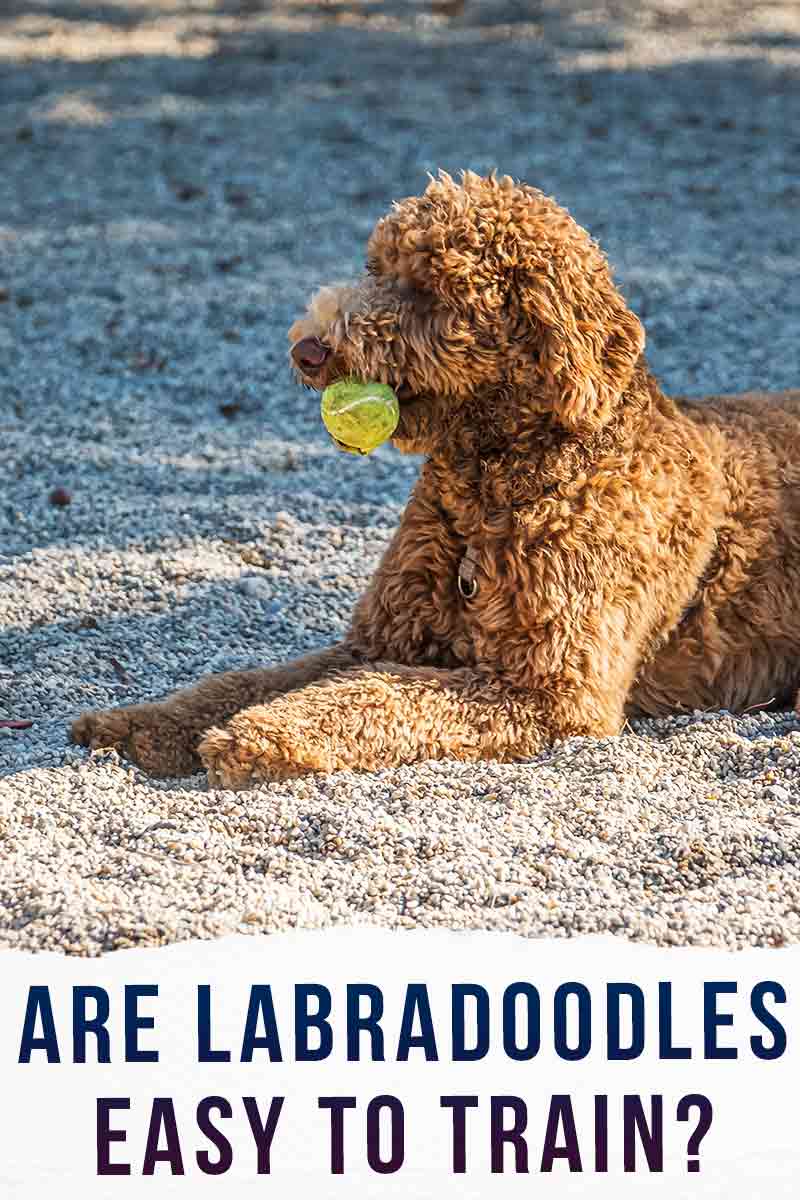 The easiest way to train a Labradoodle is to follow a slow and steady process with any new cues. This means starting by teaching them in the simplest way possible, and adding distractions and duration over time.

We wouldn’t show a dog how to come when they are called as a little puppy and immediately expect them to return to us when a pheasant lands nearby or another dog runs past. Even the easiest dogs to train need to learn that our commands mean the same thing, even when there is a more fun option on offer.

Proofing is the process we use to teach dogs that our cues or commands mean the same thing wherever and whenever they happen. Take sit, for example. We begin by teaching it indoors in an empty room. We then move the cue to other rooms in the house, then outdoors. After our dog is happy sitting wherever we ask, we start adding other distractions.

We ask for a sit and then take a step away for a moment before moving back. The handler can increase the distance we move from them slowly over a number of sessions. We then add duration, making the sits a longer period of time, but still right in front of us. We then combine the distance and duration, gradually moving further away for longer.

Once that is well established, we do the same thing in an area with other people or dogs present at a distance. Then somewhere there might be wild animals. Each stage is taken carefully, in a controlled way and only increasing the difficulty in one respect at a time.

If you do this process with all of your Labradoodle’s training, they will have the very best chance of getting it right wherever you are, and whatever is going on.

Are Labradoodles Easy To Train?

Labradoodles are a relatively easy to train breed, as long as you use the right methods!

The Labradoodle is an intelligent, focussed, confident dog. They are bred from generations of cooperative and clever pups, which do really well when working with their human friends.

To get the most out of your Labradoodle’s training, make sure you use positive reinforcement methods and go slowly. Take each stage a step at a time, proof your cues and don’t rush. You’ll soon have an obedient, easy to live with dog.