The black Labradoodle is an increasingly popular dog. Their curly coat and friendly personality makes them a welcome addition to many homes.

This color is most often the result of combining a black Labrador Retriever mixed with a black Standard Poodle.

But they can come from just one black parent.

Black is a dominant gene.

This means that even if only one of the parent breeds has a black coat, there’s at least a 50% chance the Labradoodle puppy will be black too.

But you will never get a black Labradoodle puppy unless at least one parent is black too.

These gorgeous pups will have the same cheerful disposition and active streak as any colored Labradoodle.

If you love the black Labradoodle, you’re not alone. This is a popular shade of the much-loved Labrador Poodle mix. So, let’s find out more!

What is a Black Labradoodle?

Also known as a hybrid, designer dog or mixed breed, a crossbreed dog is the combination of two different purebred parent breeds.

In the Labradoodle’s case, his parent breeds are the purebred Standard Poodle and the purebred Labrador Retriever. 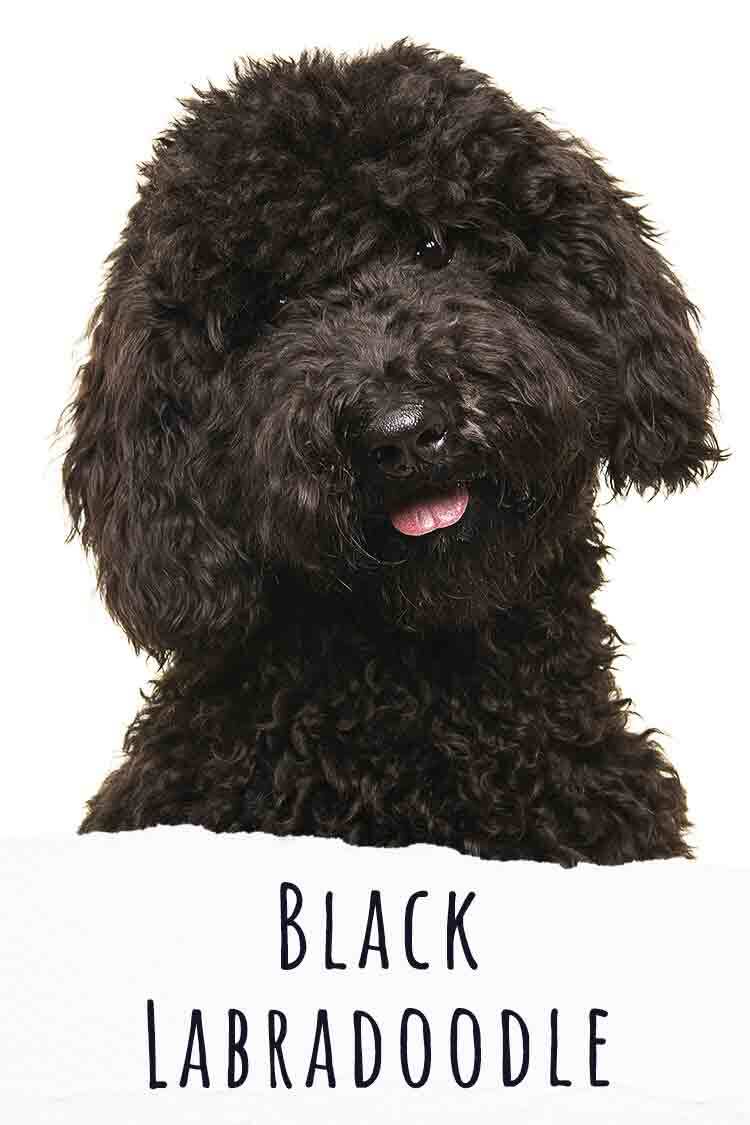 Labradors, on the other hand, only come in three colors: yellow, chocolate and black.

Because black is a dominant gene, and because both Labradors and Poodles are available in black coat colors, black is one of the most common coat colors of their Labradoodle offspring.

Let’s talk more about the genetics behind dog coat colors.

In spite of the wide variety of doggy coat colors and combinations available in the canine kingdom, all coat colors are the result of two base colors in a dog’s genetic code.

These base colors, according to studies published by the VCA, are black and red.

Because Labradoodle dogs are crossbreeds, their coat color variety is broadened due to their wider gene pool.

This means Labradoodle dogs are available in an abundance of coat colors including red, gold, black, white, cream, caramel, brown.

And even different color combinations like black and white, brown and tan, caramel and white, and so on.

That said, the most common color of a Labradoodle, as we mentioned above, is black. Black is a dominant shade, so will usually overpower other colors.

And while many Labradoodle enthusiasts love and seek out this color, others have concerns regarding what the black color could mean for their Labradoodle’s overall temperament and health.

Let’s take a closer look at one of these main concerns.

‘Black Dog Syndrome’ is a real concept coined by a number of professionals.

It’s a pretty big concern amongst dog enthusiasts, especially dog trainers, behaviorists, veterinarians and those who work at shelters.

Sadly, some studies have shown that black and brown dogs are more likely to be abandoned by their owners and that darker colored dogs like the black Labradoodle are less likely to be adopted in shelters. But why?

In some cultures, large black dogs are a symbol of impending doom or death, while other cultures portray black dogs as being more aggressive.

Some people may find that black dogs are more difficult to read than lighter colors, while others simply desire a more unique coat in their dog.

Is There Any Truth to This?

The truth is, there haven’t been any real, conclusive studies to prove that black dogs really are more aggressive or less loveable than any other color of dog.

In fact, black Labradoodle dogs are just as affectionate, intelligent, and incredible as their other colored counterparts so long as they are properly trained and socialized.

Studies have shown that Labradoodles fall somewhere between their two parent breeds in terms of temperament.

So, as long as they’re well socialized and properly raised, a Labradoodle will be just as friendly and loving as Labradors and Standard Poodles. Both of these breeds are known for being affectionate, loyal, and friendly.

A study from 2008 compared aggression in different dog breeds.

The Labrador consistently fell way below average aggression levels, and the Poodle was usually average, or slightly above.

So, Labradoodles that are raised well will usually not be aggressive, no matter what their color.

Now that we know they are usually no more aggressive than their parent breeds, let’s take a closer look at the black Labradoodle temperament as a whole.

Labradoodles are famous for their family-friendly demeanor, and the black Labradoodle is no different.

This is a very affectionate and loving dog who can get along well with children and other pets.

That said, it’s important to note that all dogs can be capable of aggressive tendencies, especially if they are not properly trained and socialized at an early age.

Training and socialization are imperative to raising a happy and healthy dog, regardless of the breed, mix or the color.

Your black Labradoodle is intelligent and athletic.

As such, he will require training sessions that are kept short, repetitive and game-like.

He will also need plenty of routine exercise to stay happy and healthy and he’ll need to be kept mentally stimulated in order to prevent potentially destructive behaviors.

It’s also important to socialize your black Labradoodle at an early age.

Properly socializing your Labradoodle includes introducing him to as many new people, places, things and experiences as possible.

Try and ensure these first impressions are positive for your black Labradoodle and never force him into an experience that is clearly frightening for him.

And, when it comes to raising a dog with children, it’s always important to teach children how to respectfully behave and interact with the family dog.

Monitor youngsters around your Labradoodle to ensure everyone is getting along safely, and work with children to help them better understand canine body language.

Black Labradoodles are no less healthy or long-lived than any other Labradoodle color. In fact, they are fairly healthy hybrids with a lifespan of around 12 – 16 years.

Of course, all dogs can be prone to genetic health issues, and your black Labradoodle is no exception.

Experts recommend that Labradoodle owners should be aware of potential health issues including:

You can help combat potential health issues in your black Labradoodle by ensuring you get him from a reputable source.

Some of these health conditions can be tested for and avoided with careful breeding. But, others are more to do with your dog’s general care.

It’s important to keep your Labradoodle on a quality diet that is specified for his age, weight and activity level.

Routine vet visits can also help ensure your Labradoodle stays in ship-shape, as can keeping up with proper grooming practices.

Grooming your black Labradoodle is no different than grooming any other color of Labradoodle dog.

He will require bathing once every two to four weeks and he should be brushed routinely each week to reduce chances of matting in his curly coat.

Along with bathing and brushing, your Labradoodle dog will need his ears cleaned regularly to keep them free of waxy buildup, moisture and debris.

And his nails should be trimmed often to keep them from cracking or splitting.

Black Labradoodle dogs should also have their teeth brushed at least once a day with a dog-safe toothpaste and toothbrush to help keep plaque and tartar at bay.

Choosing a puppy from a reputable breeder is the best way to get a healthy adult dog with the start of a great temperament.

Put plenty of research into your puppy search.

Go to breeders with a list of questions, and make sure both the puppies and mother dog are well cared for and loved members of the family.

Black Labradoodle puppies are quite common because their color is dominant, and they are not the most popular shade available. So, your search shouldn’t be too hard.

Plus, this can mean black puppies are a little cheaper.

Some Labradoodle puppies can cost even more, but prices will vary depending on your location and on public demand for puppies.

These puppies may be cheaper up front, but are likely to have poor general care and higher risk of health issues.

If you cannot afford a puppy from a reputable breeder, you can always rescue an older black Labradoodle.

Since black is one of the most common colors for Labradoodle dogs, it’s likely you’ll have no trouble finding one to rescue.

Many mixed breeds don’t have specific, dedicated rescue centers. But, none of them are quite as popular as the Labradoodle!

Take a look at rescues near you to see if there are any specific to the Labradoodle breed.

If not, see if you can find ones dedicated to the parent breeds.

Many of these will also take in mixed breeds.

Alternatively, you might find a black Labradoodle in a general rescue center.

Work closely with rescue center staff to make sure the dog you choose is suitable for your home and the care that you can offer.

Black Labradoodles, like any other color, need plenty of exercise, mental stimulation, and time dedicated to their social needs.

Is the black Labradoodle right for you and your family? If you are considering investing in a Labradoodle dog, there’s no reason you shouldn’t choose a black one.

In fact, there are even benefits of going with a black Labradoodle, as these dogs are less likely to produce tear stains and show dirt.

Aside from grooming benefits, black Labradoodles are known to make loving, intelligent, and family-friendly companions.

So, why not ignore all the white noise about this beautifully colored dog and take a chance on a black Labradoodle?

With proper training, socialization, and a lot of love, you’re sure to fall head over heels with your pooch no matter what color he is.