An excited Labradoodle puppy can present their owner with a lot of challenging behaviors.

Puppies typically become over excited through rough play, whilst incorporating structure and routine into their day can improve calmness.

Puppy parents can also reward calm behavior, to get more of it in future.

Let’s find out what makes Labradoodle puppies excited, how to recognize overexcitement, and how to restore calm.

Labradoodles are one of the original designer dogs, and remain one of the most popular.

They are the offspring of the fabulously friendly Labrador Retriever and the super smart Poodle.

They have a reputation for being trainable, affectionate, cuddly family pets. And many of them have the added bonus of a low-shedding coat.

But even with so many virtues to look forward to, Labrdoodle puppy parents can often feel overwhelmed.

Like all young dogs, Labradoodle puppies sometimes have more energy and enthusiasm than they know what to do with.

And they don’t yet know which behaviors their human family will love and reward them for – and which they will be less than impressed by.

So at first, it may feel like they channel a lot of their excitement about life into damaging your home, grabbing your clothing, and nipping your fingers.

These behaviors can really sour your relationship, unless you put some effective coping strategies in place.

So let’s take a look at what it means when a dog gets over excited, and the best ways to keep your Labradoodle puppy calm.

Signs Your Labradoodle Puppy is Overexcited

All puppies have moments of explosive energy. So it can be difficult to know if your puppy’s behavior is normal, or excessive.

What falls within normal youthful exuberance, and what counts as overexcited, can be surprising. 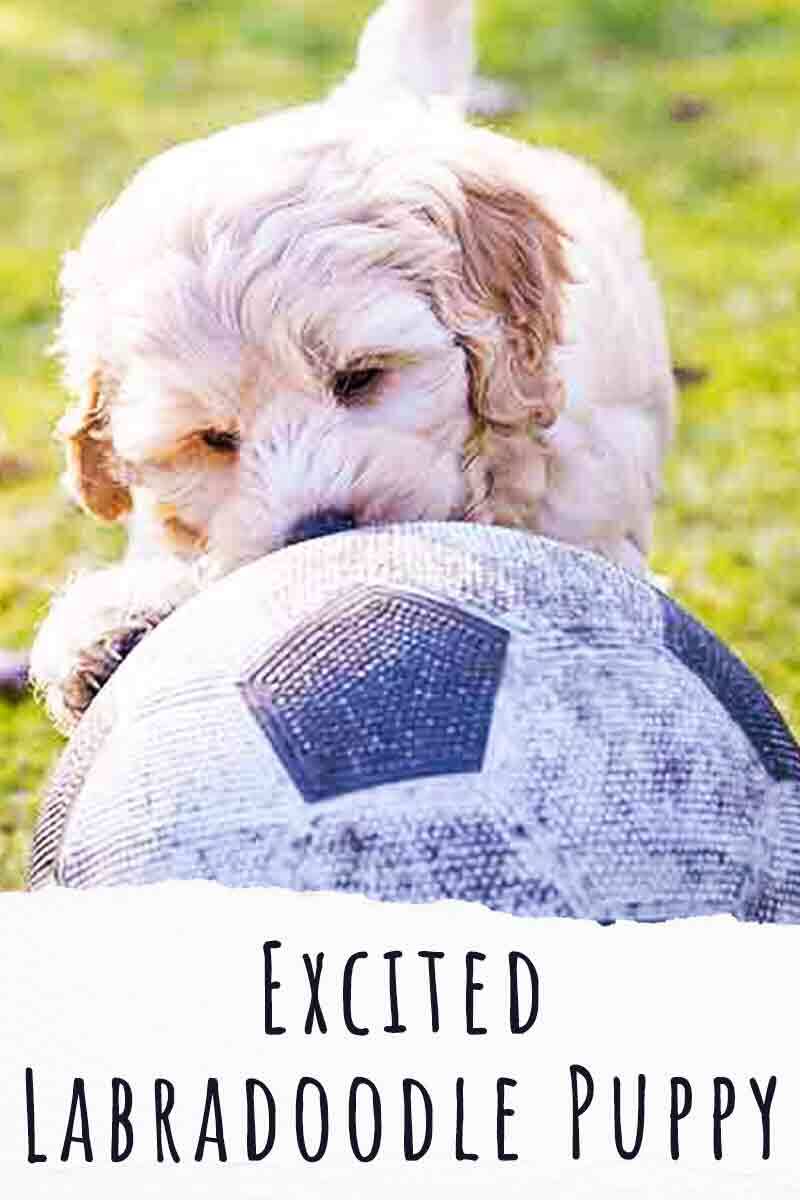 Almost every first time puppy parent is taken aback to discover how much wild behavior is perfectly typical.

Biting, pouncing, barking and even dramatic growling are all normal elements of puppy play.

And a bit of enthusiasm is only to be expected – they are young after all!

But puppies can also easily tip from excited, to overexcited.

This state is linked with unwanted manic behaviours such as jumping on people, nipping and biting.

Another sign is if your puppy is calm one minute and then suddenly starts running back and forth or in circles.

If your Labradoodle is constantly nibbling at your fingers, tugging on your clothes, snatching at toys, jumping up and down, or spinning around, you may have an overexcited puppy on your hands.

It’s Normal For Puppies To Get Over excited

Like human children, puppies aren’t much good at regulating their emotions.

So there’s nothing “wrong” with a puppy who gets overexcited. They just don’t have the capacity to better control their mood yet.

But that doesn’t mean you have to accept being bitten, or having your clothes and furniture destroyed.

When Things Get Out Of Hand

Teaching a puppy to avoid or overcome out of control excitement is an important part of raising a well behaved adult dog.

So now let’s take a look at how to prevent overexcitement, and how to calm down an excited Labradoodle puppy.

Like children, puppies often look to their primary carer for clues about how to behave, and follow their lead.

But sometimes there’s a gap between the signals we think we’re sending, and the message our puppies are actually receiving.

For example, play wrestling and rough housing with your puppy might seem like a fun way to bond with them.

But for them it can be overstimulating, and over exciting.

Another example is yelping if our puppy delivers a painful nip. To us that means “ouch, please don’t do that again”.

But high pitched noises tend to make puppies more hyped up (which is why so many dog toys squeak!).

Children especially are prone to shouting and high-pitched squealing, getting down on the floor with the puppy, and squeezing and over-handling them.

They’re also pretty unreliable at spotting the signs that a puppy is getting over aroused, so that an excited Labradoodle puppy tips into a state of overexcitement.

The Importance of Schedules for Your Labradoodle Puppy

Puppies thrive on a schedule which provides them with structure and consistency.

When their day is full, and they know what’s coming next, they are less likely to make up their own entertainment.

Puppies at a loose end are a quick recipe for overexcitement!

Having a regular schedule for exercise, training, meals, playtime, and even naptimes can go a long way towards keeping a Labradoodle puppy calm.

Will More Exercise Calm Down An Excited Labradoodle Puppy?

Puppy exercise requirements are very different to those of an adult dog.

A full grown Labradoodle will need at least an hour of daily exercise to stay fit and out of trouble.

Labradoodle puppies don’t need formal exercise as long as they have time to run around and play.

Playtime should be supervised to make sure they don’t get over excited.

Puppies’ bones, tendons, and joints are still developing, and too much exercise can cause stress leading to health issues like hip dysplasia later in life.

Many people follow the 5 Minute Rule, which states that a puppy should get 5 minutes of walking for every month in age.

Training, on the other hand, is an excellent way to bring about calmness in puppies.

Labradors and Poodles are both intelligent working breeds and eager to please, which means Labradoodles are very capable of learning.

They also provide mental exercise and tire your puppy out in a structured way.

Which means they won’t resort to a wild campaign of destruction around your home instead.

You might be interested in our Dogsnet Training Courses, which include suitable training games from puppyhood through to adulthood.

Is Your Labradoodle Puppy Getting Enough Attention?

Labradoodles are sociable dogs that love being around people.

And as puppies they’re also perfectly aware of their own vulnerability.

So their instincts tell them to stay close to their primary carer (you), and make sure you don’t forget about them.

Sometimes excitable behaviors like barking, jumping up and down, and nipping us are ways to make sure they have our attention.

It’s not a bad thing for puppies to want interaction with you.

Engaging with them is important for their emotional development, and for building your bond.

You can avoid them using over excited behaviors to get your attention by taking the lead and giving them attention before they need to ask for it.

How to Calm an Excited Labradoodle Puppy

When a puppy starts to get over excited, it’s best to act quickly, and decisively.

Stop playing with him, and take him away from any noise or stimulation.

You may be able to hold him quietly while he calms down.

But if he’s extremely agitated it may be best to put him in his crate or in a dark room, and remove yourself from his reach for a few minutes.

When he regains his composure, reward him with praise or a treat, to reinforce calm behavior.

Reinforcing calm behavior shouldn’t just be saved for after a period of overexcitement.

Puppies are less likely to do something at all when another incompatible behavior is more rewarding.

So if you can capture moments of calm behavior whenever your puppy offers it, and make them really rewarding, they’ll offer more of the same behavior in future.

A great example is when they’ve taken themselves to bed for a rest.

Keep a pot of treats within close reach of their bed, and without making a fuss, just quietly place one between their paws while they’re chilling out.

You can also reward them with a treat for quietly chewing on a toy, or watching you without jumping up.

Since puppies are so physical when they’re over excited, a lot of puppy parents worry that their puppy is actually aggressive, and will grow up to be dangerous.

Labradors are known for being outgoing and laid-back. Although Poodles may be a little aloof by contrast, neither parent breed is particularly prone to aggressive behavior.

And it’s actually rare for any puppy to ever be truly aggressive.

They may snarl and growl and bite, but these are normal play behaviors in young dogs.

Canine aggression is usually a reaction to fear, and puppies are more likely to run and hide in a situation where they feel threatened.

Careful socialization to lots of different people, places, things, sounds, and smells whilst they’re a puppy will reduce the risk of them being frightened by them in future.

How to Cope with an Excited Labradoodle Puppy

It’s good to understand what triggers your Labradoodle’s overexcitement.

In most cases it will be because he’s been hyped up with excessive physical playing.

Children in particular may not understand how the way they play can over stimulate their puppy.

Every Labradoodle puppy is a unique individual, and they have their own threshold for getting overexcited.

By working with your puppy and understanding what triggers their excitement, you can start to manage it and make calm behavior more rewarding for them.

Have you ever had to cope with an excited Labradoodle puppy?

What strategies could you rely upon to calm them back down?

Tell us about your experiences in the comments box down below.

Shabelansky. Characteristics of Excitable Dog Behavior Based on Owners’ Report from a Self-Selected Study. Animals. 2016.