The average Labradoodle size is between 22 and 24 inches in height, and 30 to 45 pounds in weight.

But this can vary quite a lot from one dog to the next.

Your Labradoodle’s size will depend on its parents’ stature, and the type of Poodle.

Most Labradoodles are bred from Labradors and Standard Poodles, but some are from smaller Poodle types.

And even though Labradoodles are fairly well established as a mixed breed, it’s still hard to predict exactly how big even a standard Labradoodle will be until they’re fully grown.

To get a general idea, take a closer look at your puppy’s parents.

Countless dog lovers across the globe have fallen in love with this low shedding, cuddly, and oh-so-smart teddy bear of a dog.

Of course, Labradoodle dogs are more than just snuggle buddies.

They are energetic dogs who quickly grow from tiny puppies into large adult dogs.

So, just how big does a Labradoodle get and what can you expect out of your Labradoodle size?

And that means exploring the genetics behind a crossbreed.

You can click the links above to jump straight to a section, or keep reading for a complete guide to Labradoodle size.

Though wildly popular, Labradoodles are still relatively new to the canine kingdom.

Mixed breed dogs can inherit any combination of traits from their parents, which is why it can be so hard to accurately predict Labradoodle size. 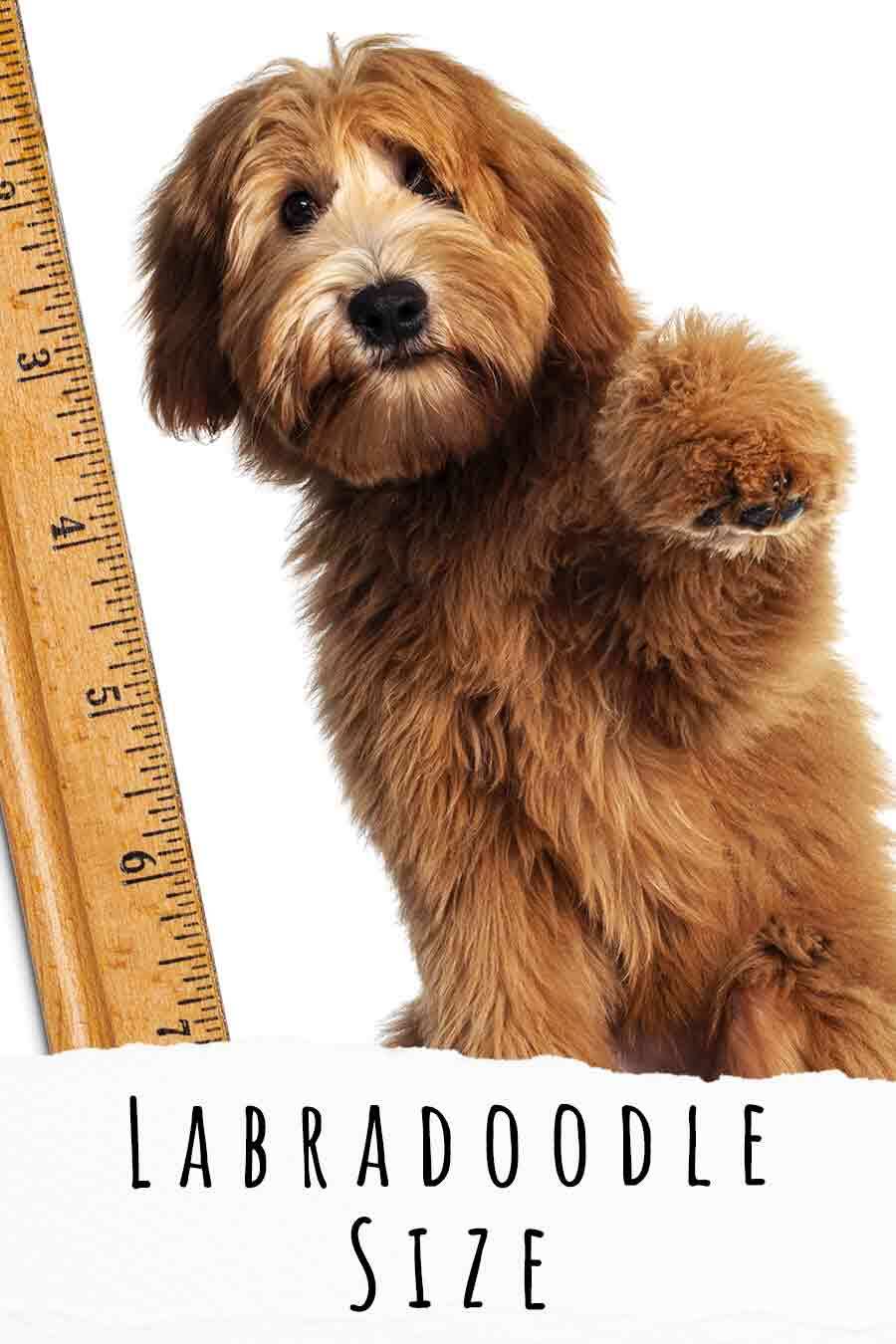 First or second generation mixes are particularly tough to predict.

But luckily, Standard Poodles and Labradors are both relatively large dogs. So, the adult size of their offspring will usually also be quite large.

Looking at the Parent Breeds

Adult Labrador Retrievers typically range from 22 – 24 inches in height and can weigh between 55 – 79 pounds once fully mature.

Females are generally smaller and lighter than males, and you may find dogs that fall outside of this range at either end of the spectrum.

Poodles can come in three sizes, but unless specified you can assume that a Standard Poodle has been used.

Standard Poodles will grow to over 15 inches tall, weighing somewhere between 40 and 70 pounds as adults.

Similar to Labradors, females are often smaller and lighter than males, with some dogs exceeding these figures altogether.

As you can see, the Poodle parent is most often smaller than the Labrador parent, but their adult sizes aren’t too different.

You can use the adult heights and weights of the parent dogs to predict your puppy’s adult size.

But remember, it’s possible for puppies to favour one parent more than the other.

Plus, like both parent breeds, female Labradoodles are usually smaller than males.

Can you Predict Labradoodle Size?

In reality, it’s impossible to predict exactly how big your Labradoodle puppy will grow.

You can look at the parent dogs to get an idea of how big your puppy may grow, but remember this is only a vague guess.

Your puppy could surprise you.

So, what does this mean for Labradoodle size?

Well, it means that Labradoodles are most often a little smaller and less stocky than their Lab parents.

And that their size could vary greatly depending on the type of Poodle bred with the Labrador to create your dog.

But, this is only a rough guideline.

Mixed breeds are unpredictable, and even puppies from the same litter can have extremely different appearances!

But, there are three different types of Poodle that can be part of the Labradoodle mix.

This is great news if you’re in the market for a Labradoodle but don’t want to deal with one that could potentially stand at 24 inches tall.

It’s just as hard to predict the size of a Miniature Labradoodle.

The average size of a miniature Labradoodle is around 14 to 16 inches in height and 15 to 25 pounds.

Just remember that a puppy can often fall outside of these guideline mesures. This is only an average.

If you want a Mini Labradoodle dog, you’ll need to seek a breeder who specifically breeds these types of dogs.

No matter what their size, your Labradoodle should be on a quality dog food specified for his age, weight and activity level.

Labradoodles will do best on a dog food made for large breed dogs.

Pick one that is high in iron-rich animal protein like chicken or beef to help promote healthy bone and muscle development.

Bear in mind that standard Labradoodles will eat a lot more than miniature and toy varieties.

The cost of feeding a larger breed may be key in choosing which size Labradoodle is best for you.

Another element of dog ownership that is affected by your dog’s size is how much exercise your pooch needs.

Regardless of your Labradoodle size, your dog is going to require a certain amount of exercise each and every day to stay happy and healthy.

Remember, the Labradoodle is a mix of two large and energetic working dog breeds.

As such, Labradoodles will do well with active owners who have the time to exercise them every day.

A good walk once or twice a day should suffice, as should plenty of playtime in the backyard or dog park.

Out of the three types, standard Labradoodles need the most exercise.

But, be wary of over-exercising them as puppies.

This can impact their joint health, and is linked to problems like hip dysplasia. https://www.frontiersin.org/articles/10.3389/fvets.2019.00490/full?utm_source=S-TWT&utm_medium=SNET&utm_campaign=ECO_FVETS_XXXXXXXX_auto-dlvrit

Is Labradoodle Health Linked to Size?

Luckily, most experts agree that Labradoodle dogs are generally healthy.

That said, they can be prone to a number of serious genetic health issues, some of which relate to their larger size.

For example, larger, deep-chested dogs like Labradoodles are at higher risk of Gastric Dilatation-Volvulus or GDV.

More commonly referred to as Bloat, Gastric Dilatation-Volvulus is a life-threatening condition that can come on suddenly.

It is caused when gas or air fills the intestines, causing the stomach and other organs to flip.

A good diet can help combat bloat, as can proper feeding accessories like puzzle feeders.

Large dogs like Labradoodles can also suffer from increased risk of joint problems like hip and elbow dysplasia and arthritis.

Choosing the Right Labradoodle Size for You

The standard Labradoodle is a large dog who requires the right diet, routine exercise, lots of mental stimulation and moderate grooming.

He’s a family-friendly dog who does best with active families or outgoing singles.

All Labradoodles get along well with children and pets, if properly socialized.

While the standard Labradoodle size is larger, this doesn’t mean the Labradoodle won’t do well in apartments.

So long as his exercise needs are met and he is kept properly mentally stimulated, the Labradoodle dog can do well in smaller spaces.

That said, he will appreciate having a well-fenced yard to play in and an owner who is around often.

Labradoodle dogs become very bonded with their people and can be prone to destructive behaviors if left on their own for too long each day.

But, Miniature and Toy Labradoodles need just as much mental stimulation as their larger counterparts.

Choosing the right Labradoodle size for you will generally depend on your space, living circumstances, and the time and cost you have to dedicate.

The standard Labradoodle is a large dog, but if you love the Labradoodle and need a smaller dog, Miniature and Toy varieties also exist.

It’s almost impossible to predict exactly how big a mixed breed like this will grow, but you can take a closer look at the Labrador and Poodle parents to get a general idea.