Cream Labradoodle puppies are gorgeous! And although their coat needs a bit of extra care, with love and attention they are likely to grow up into really wonderful pets. Full of energy, and packed with fun.

The cream Labradoodle is a Labrador and Standard Poodle mix with an off-white, pale coat. But the shade of that cute cream coat can vary quite a lot. And can be called several different names too! This means that puppies with different shades of fur are advertised as the same color. And as cream is not one of the most popular shades of Labradoodle, finding a perfect cream Labradoodle puppy might be tough anyway! Fortunately, it’s still possible to find cream doodle puppies through responsible breeders, and even at rescue centers.

The cream Labradoodle is a dreamy doodle indeed. But when you start your research to find your puppy, you may be surprised that not all dogs in this shade are actually called cream!

In this article, you will learn all about the cream Labradoodle coat color and the color pigment genes that create this pigment.

What is a Cream Labradoodle?

Cream Labradoodles are mixed breed dogs that have inherited a beautiful creamy coat. They are a large breed dog, resulting from a Labrador Retriever and Standard Poodle mix. And they aren’t always described as cream in their adverts. Breeders might use the following terms:

‘Red’ may seem truly out of place in a description of the cream Labradoodle.

But there is some logic here!

With so much variety in the cream coat color spectrum, you may be surprised to learn a single color pigment is driving all of them. This pigment is called phaeomelanin. It controls the red spectrum of coat colors. 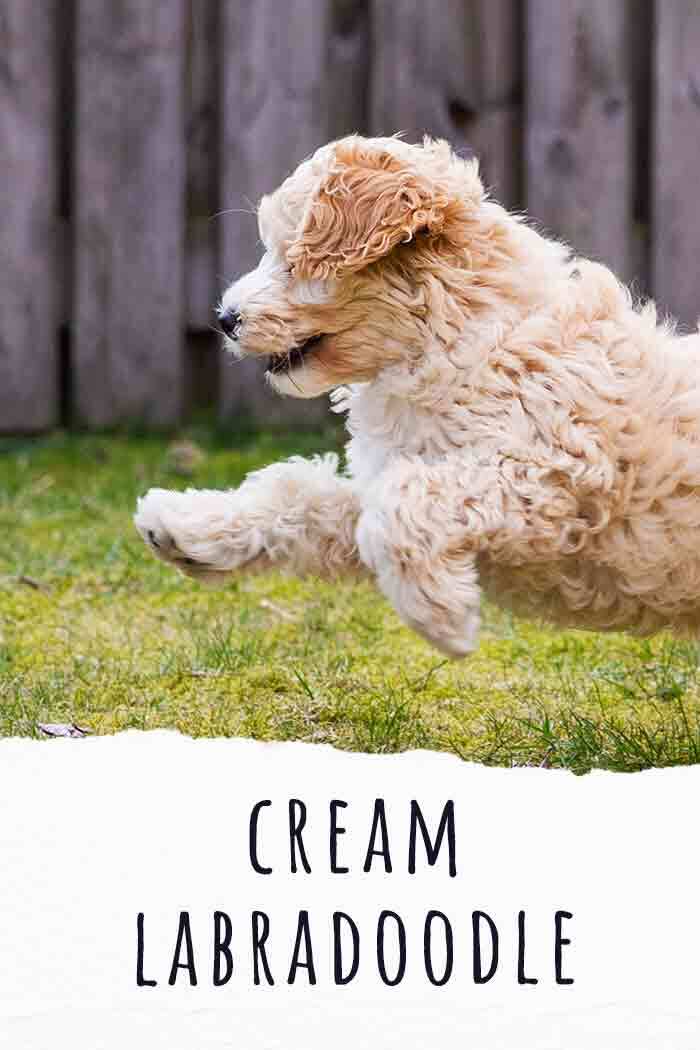 Interestingly, phaeomelanin’s “default” or pure color is not red. It is yellow or gold. Phaeomelanin is running the show in determining whether a Labradoodle will grow up to have a cream coat. But there are lots of other genes working behind the scenes to influence how creamy that coat will look.

Phaeomelanin is a form of pigment, or melanin. The cells responsible for coloring each hair on your dog’s body are called melanocytes. Melanocytes have the job of adding phaeomelanin to each hair as it grows out. Melanocytes aren’t perfectionists. Sometimes they may add in a bit more color pigment at first and slack off later. This is why some (but not all) cream Labradoodle dogs will grow up to have adult coats that are darker at the hair tips than they are at the hair roots.

This Causes the Variations

This is one way – but not the only way – that a cream Labradoodle can grow up to have a darker cream or a lighter cream coat. This is also why there are so many other descriptors used by the major Labradoodle breed associations to describe “cream.”

A Labradoodle with the genes for the cream coat color that looks darker than standard may be called:

A Labradoodle with the genes for the cream coat color that looks lighter than standard may be called:

Remember the melanocytes we talked about here earlier? These are the hair follicle cells responsible for giving this Labradoodle their lovely coat color. But what is telling each melanocyte how much of which pigment to add to each developing coat hair?

A collection of genes is called a genotype. How those genes appear or show up is called their phenotype. So a cream Labradoodle has the genes for a cream coat phenotype.

There are two main types of genes: dominant and recessive. When it comes to coat color, eumelanin (black) is dominant and phaeomelanin (red) is recessive.

Now you are probably starting to see why breeders can spend a lifetime studying the genome just for their own breeding dogs. And why breeding cream Labradoodle dogs isn’t always so easy.

This is especially the case when you consider that a Labradoodle is a breed that is still rather early in their evolution.

Phaeomelanin only controls the color of a dog’s coat. So your cream Labradoodle’s nose, eye, skin and nail color is controlled by the other canine color pigment, eumelanin. Eumelanin is responsible for black and the various shades in that color spectrum.

Labradoodles are large dogs that will generally fall somewhere between the sizes of their two parents.

While color genes are the primary driver when a Labradoodle puppy inherits a cream coat, there can be other factors at work as well. Diet, exposure to ultraviolet light, type of shampoo, overall health. Even certain skin conditions can also cause a dog’s coat color to change over time.

This is why cream Labradoodles can be quite rare. Not only do they need a very specific set of genes, but they also may change color as they grow older. If coat color is really important to you, rescuing an older cream doodle might be a better route.

In general, you can expect your creamy doodle to be friendly, intelligent, energetic, and eager to please. Your doodle must be socialized well from the time they’re a puppy to encourage the most friendly temperament as an adult. These mix breeds need plenty of energy too, no matter what their color. So, make sure you’re ready for the amount of time you’ll have to dedicate to exercise and social interaction.

Labradoodles are a very new breed, so predicting health concerns that could affect them is still quite tricky. However, they’re large dogs, so they will be at risk of problems that affect large breeds.

Be wary about over-exercising your cream doodle puppy when they’re young, as this can make joint problems worse in adults. Also, learn more about the health issues that can affect the two parent breeds – Labs and Poodles. Mixed dogs can inherit health problems from their parents, so can be at risk of the same problems.

Only ever choose reputable breeders that health test their dogs. This will minimise the risk of your puppy growing up with heritable health problems.

Cream puppies can be quite hard to find, as this color is recessive. So, puppies need to inherit the right genes from both parents. And, as we learnt earlier, breeders can label the same shade in different ways.

To some, a puppy might be off-white, but to others, it could be light caramel. This can make your search harder.

It may be worth widening your search to include some of these terms if you’re struggling to find a breeder. But, no matter how you go about it, make sure to only choose reputable breeders that look after their animals and health test.

Never choose puppies from puppy mills or pet stores. And, remember that Labradoodle puppies won’t necessarily stay the same shade for their entire lives. If color means this much to you, you might want to consider choosing a rescue Labradoodle, whose color will be more stable.

What Do You Think of the Cream Labradoodle?

Are you caring for a cream Labradoodle or hoping to add this beautiful dog to your family? Share your thoughts with us in the comments! We can’t wait to hear from you.