As much as we want them to stay little forever, Labradoodle puppy growth happens. And it is very fast.

In fact, puppies grow much faster than human babies do.

An 8 week old Labradoodle will already weigh between 7 and 12 pounds!

By the time she’s 4 or 5 months old, she’ll have reached roughly half her adult weight.

And by her first birthday she may weigh upwards of 80 pounds.

How Big Do Labradoodles Grow?

The standard Labradoodle is the result of pairing a Labrador Retriever with a Standard Poodle.

When fully grown, these dogs stand between 21 and 26 inches tall at the shoulder, and weigh from 55 to 90 pounds.

Miniature Labradoodles are considerably smaller, standing somewhere between 10 to 18 inches tall and weighing from 15 to 25 pounds.

These dogs are the result of mating a Lab with a miniature Poodle or Toy Poodle.

Sometimes when Labradoodles reach a size which is in between these two ranges, they are described as medium Labradoodles.

Males tend to be larger than females in any Labradoodle type.

Many people want to know how big their puppy will be when fully grown.

We’ll look at some formulas that can help predict size, but bear in mind that these will merely give you averages.

Every dog is an individual. 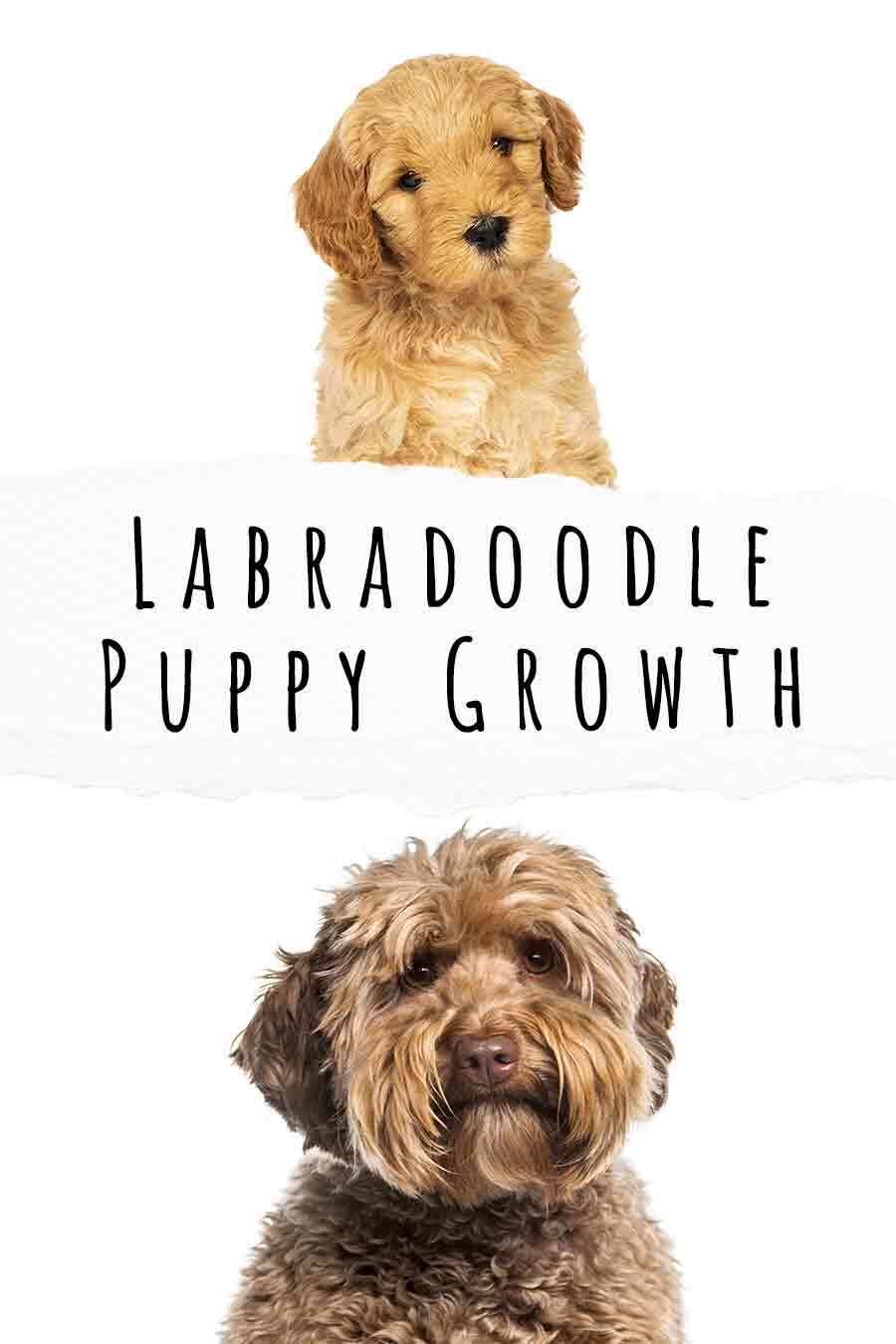 Mixed breed dogs like Labradoodles can even differ in size significantly within a single litter.

So let’s see what that could look like next.

Whenever two different breeds mate, their puppies may grow up looking a lot like one parent, or some combination of both.

This is why there is such variance within designer dog breeds.

The Labrador generally weighs between 50 and 80 pounds and stands from 22 to 25 inches tall.

They typically carry their size on a well-built, muscular frame.

In profile, the ideal Poodle has longer legs relative to their body than the ideal Labrador, so they give the impression of being leaner and more lithe.

If a puppy’s parents are very similar in size and build, we can use that information to make an educated guess about how big the puppy will grow up to be as well.

They will end up broadly the same size as both of their parents.

But if their parents are very different in size and build, that doesn’t work anymore.

When it comes to weight, there are two alternative ways to estimate your Labradoodle puppy’s adult weight, using their current size.

These methods are simply for reference and in no way should replace regular vet weigh-ins and check-ups.

But they’re a fun way of trying to predict what size dog is in store for you.

At two months, whatever he weighs will be roughly one quarter of his adult weight.

At four months take how much he weighs, double it and add 10 pounds.

When do Labradoodles Stop Growing?

Most breeds tend to do the majority of their growing during their first 6 months of life.

In fact, bigger dogs can take twice as long to reach full size as small dogs.

A standard Labradoodle is classed as a medium to large breed and will typically reach their full height by the time they’re one year old.

However, they can continue to fill out and add weight until they’re up to 2 years of age.

By contrast, miniature Labradoodles are generally fully grown at 11 to 13 months old.

Spaying and neutering is an effective way to prevent unwanted pregnancies, and prevent some health problems.

But if your male puppy is neutered before they’re fully grown, studies show that the withdrawal of sex hormones delays closure of the growth plates between their joints.

In other words, without testosterone male dogs grow taller than normal.

Prolonging the growth period like this is not a good thing and can lead to joint problems such as cruciate ligament ruptures.

Many vets believe this is of particular concern for Labradoodles, because they are already at increased risk of joint diseases such as hip dysplasia.

Small-breed dogs can be spayed or neutered at about 6 months of age.

But large-breed male dogs shouldn’t be neutered until after growth stops, which is usually between 9 and 15 months.

When spaying a large breed female, there are a number of factors, such as lifestyle and risk of disease, to consider.

There is a healthy amount of evidence now that spaying and neutering might not be the best idea for many dogs.

And that they are more prone to some illnesses when they have these hormones taken from them.

For example, puppies of all breeds need more calories every day relative to their size than adult dogs.

This is to fuel all the growing they’re doing.

However, overly rapid growth caused by too much fat relative to protein in their diet can cause number of growth disorders, several of which are incurable.

This is particularly a problem for large and giant dog breeds.

Eating too much as a puppy also predisposes dogs to obesity in later life.

Labrador Retrievers in particular are known for being insatiable when it comes to food.

Indeed, studies show that a gene mutation may be the cause of a voracious appetite in some Labs.

Left unchecked as a puppy or adult, this can result in an increased risk of diabetes and heart disease further down the line.

If they don’t receive the right vitamins and minerals, in the right proportions, then they can suffer problems.

These include demineralization of the bones and skeletal deformities as they grow.

Can I Make My Puppy Grow Faster?

If you’re worried that your Labradoodle puppy isn’t putting on weight as quickly as he should, make an appointment with their vet.

He might have a parasitic infection which is preventing him from benefiting from all the nutrition in his diet.

Never try to make him grow faster by feeding him more.

Overfeeding can cause digestive problems and create a fat puppy.

A puppy’s growth is more than physical.

You want to make sure that his mental and social skills are developing properly as well.

The period between 8 and 12 weeks is an important one in a puppy’s growth.

If not well socialized in this time, they can become fearful of anything unfamiliar.

Even at the tender age of 8 weeks, basic training and socializing can start.

At this point they still have short attention spans, but it’s a good time to lay the foundations of important behaviors, like recall.

Use positive training methods with food as incentive.

With any mixed breed there are always some uncertainties about which parent they’ll favor in personality and appearance.

But we do know that the best indicator of how big a puppy will get is to look at the parents.

Watching a puppy grow up is an amazing experience. Enjoy it while it lasts.