The Miniature Labradoodle has one Labrador Retriever parent, and a Toy or Miniature Poodle parent. They are therefore medium sized, and often have a wavy or curly coat.

Mini Labradoodles are usually attentive, intelligent dogs. They are prized for their low-shedding coat, trainability, and adorable “teddy bear” looks.

Believe it or not, the Lab and the Poodle have a similar history. They both originated as retrieving water dogs. 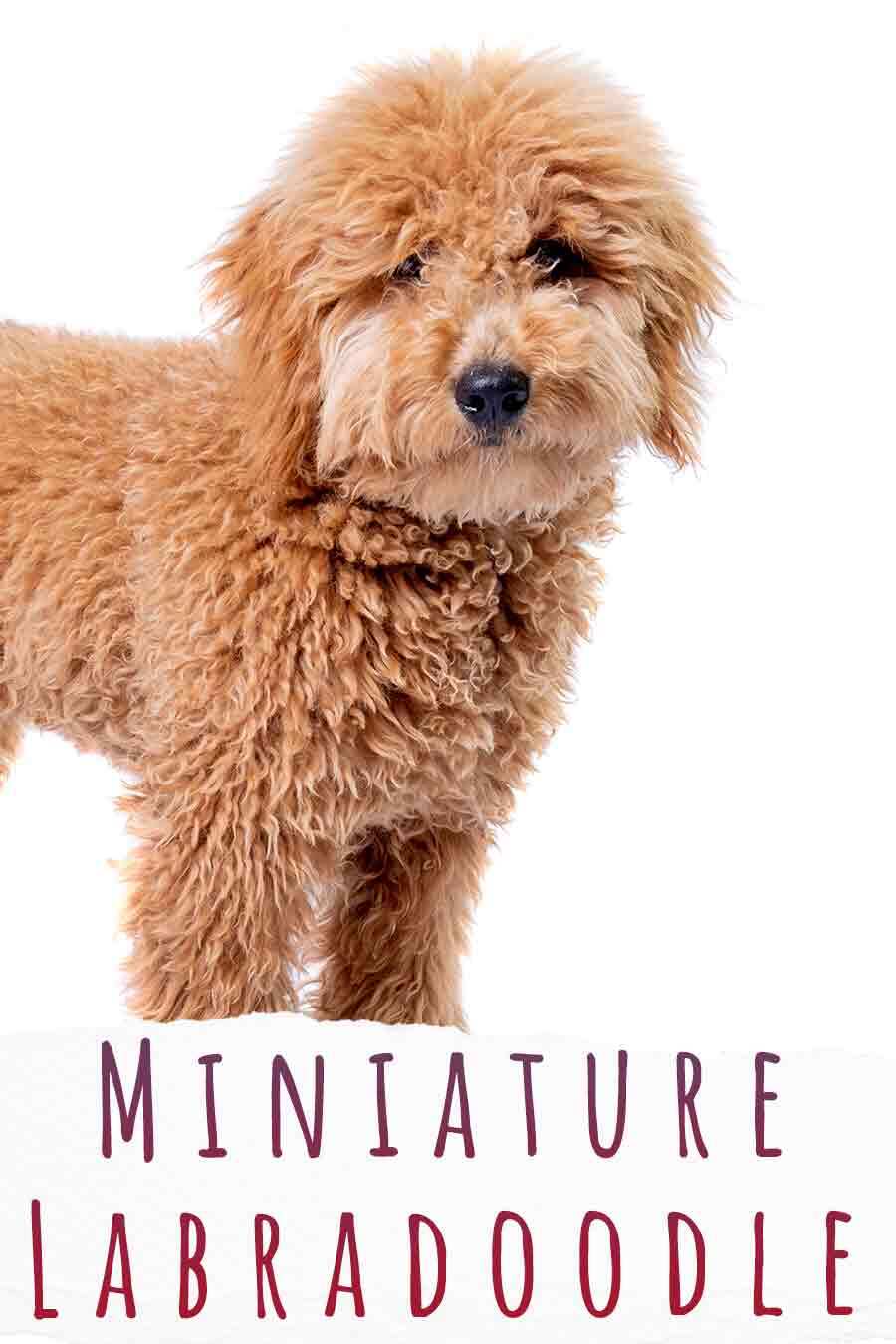 Then in the 19802, an Australian breeder in pursuit of an allergy-friendly service dog created the first standard Labradoodles by crossing Labs and Standard Poodles.

When these hybrids began to achieve popularity as pets too, breeders turned their attention to creating smaller versions.

Small dogs are often thought of as more desirable because they take up less space, cost less to feed, and adapt better to apartment living. And thus the mini Labradoodle was born.

By the 1990s, some breeders had started working towards a new version of the Labradoodle. One which bred true, rather than being created by crossing a Lab and a Poodle every time.

These dogs were named Australian Labradoodles, and they are also available in standard and miniature sizes.

Miniature Labradoodles generally range from 15 to 25 pounds, and stand from 12 to 15 inches tall.

But when you breed a purebred Labrador with a pedigree Miniature Poodle, the offspring can be unpredictable.

So they could be surprisingly like a Lab – 50 to 80 pounds of muscle and up to 25 inches tall. Not so mini after all!

Or they could lean heavily towards looking like a Poodle – weighing a dainty 10 and 15 pounds and standing just 10 to 15 inches tall.

Even within a litter puppies can vary in size, and you won’t know how big they’re going to get until about their first birthday.

First generation miniature Labradoodles rarely have a Toy Poodle parent, because their difference in scale relative to a Lab is so large.

But where a Toy Poodle is used, you can expect mini Labrdoodles to be smaller still.

Toy Poodles are just 4 to 6 pounds on the scales, and less than 10 inches tall.

If size is important to you, then a first generation mini Labradoodle is a risky gamble.

But there are ways to improve the odds of getting a puppy who will stay petite her entire life.

F2 Labradoodles and beyond

If their parents are small, then the F2 generation is likely to be small too.

The same applies to later generations as well.

Which also leads us too…

Aussie Labradoodle breeders are trying to create a new purebred dog, which has uniform physical characteristics, and a predictable temperament.

Mini Aussie Labradoodles are reliably 14 to 16 inches tall, and weigh 16 to 24 pounds.

However, several other breeds have also contributed to the Aussie Labradoodle gene pool.

So you’ll have to decide whether ancestry or guaranteed size is more important to you.

There are essentially 3 types of Labradoodle coat.

Mini Labradoodles are most closely associated with the curly, low-shedding wool coat of the Poodle.

But they can also have short, straight hair like the Labrador.

And thirdly there’s the possibility of a fleece coat, which is a combination of both textures.

Mini Australian Labradoodles can also have a silky coat, thanks to their Cocker Spaniel genes.

While Labs are typically either chocolate, black, or yellow, there are a range of shades within these colors.

Poodles come in a rainbow of fabulous shades from basic black to apricot, red, silver, and more.

Which means there’s not much limit on what color a Mini Labradoodle can be!

However, Australian Labradoodles are more likely to have patches of two different colors in their coat.

As with appearance, a Mini Labradoodle’s temperament can align more closely with one parent’s or be a mixture of both.

Luckily, the Labrador and the Poodle each have excellent qualities.

They are both loyal, playful, energetic, and intelligent.

While the Labrador is famously friendly and outgoing, Miniature Poodles can be a bit timid around new people and other dogs.

However, as long as they have been socialized from an early age, mini Labradoodles should get along well with other dogs and animals.

Since both parents have lots of energy, you can bet this will be a dog who loves to take part in training games and retrieve objects.

Since both parents were original bred to work in close cooperation with people, Miniature Labradoodles also love being around their family.

This means separation anxiety can become a problem if they are left alone too much.

Life With a Miniature Labradoodle

What does day to day life with a mini Labradoodle look like?

From the moment you bring your puppy home, introduce him to lots of different environments, people, and animals.

This process – known as socialisation training – will teach him confidence for the future.

Formal training should start when a puppy is 8 to 10 weeks old.

The longer you wait, the more likely it is that your puppy will fill the void with habits of their choice, rather than habits you want them to have.

Since these dogs are so smart, they respond quickly to positive reinforcement training.

But, it takes more time and commitment on your part to fully satisfy their need for mental stimulation.

Both the Lab and the Poodle are high energy breeds. Even dinky mini Labradoodles need a lot of physical exercise.

Ideally these dogs will have a yard to run around and play in. This is in addition to taking daily walks with their owner.

Both parents are water retrievers and their offspring many also enjoy swimming.

Regular exercise, along with a balanced diet, is the best way to keep a miniature Labradoodle fit and healthy.

Being overweight can cause all sorts of health issues in dogs.

Excess pounds can put pressure on their joints, increasing the risk of hip dysplasia, a joint condition that both parents are already predisposed to.

Don’t forget that their minds also need to be active.

Puzzle toys are a good way to keep a smart pup mentally engaged and keep him out of trouble.

Since the Mini Labradoodle’s coat is so variable, grooming requirements will depend on the type they have.

Dogs that have the Poodles’ lush, curly coat require a fair bit of maintenance.

Keeping them free of tangles and mats requires daily brushing.

If their coat is shorter like the Lab’s it won’t require as much care, but they will shed much more.

Mini Labradoodles are highly sought after for their low-shedding coat.

They are often referred to as hypoallergenic dogs.

However, it’s not shed hair which triggers allergies.

In fact it’s proteins in their saliva, sweat, and urine.

All dogs produce these proteins, so it’s not true to say that Labradoodles of any size are hypoallergenic.

As with appearance and temperament, your mini Labradoodle can be at risk for health conditions that affect either parent.

In this case, the Poodle and the Labrador share some of the same potential problems.

These include hip dysplasia, progressive retinal atrophy (which causes blindness), and bloat.

Labrador Retrievers are also at risk for cataracts, exercise induced collapse, and cancer.

Patella luxation, Cushing’s Disease, and diabetes are among the health concerns of the Miniature Poodle.

Labrador Retrievers have a life expectancy of 10 to 12 years, Miniature Poodles an impressive 10 to 18 years.

Are You Ready to Bring a Miniature Labradoodle into Your Life?

Miniature Labradoodles are typically friendly, outgoing dogs who get along with children and other pets.

But there are some things to consider before getting this mixed breed.

These are energetic dogs who need plenty of regular exercise and daily training.

In fact, they might be too bouncy and time consuming for households with young children.

If you’re prepared to give them the attention they deserve, the Mini Labradoodle can make a wonderful addition to your family.